Although our Taiwan trip was short, it did technically span two different weeks which let me split it up between two weeks of adventure posts.

Our second day in Taiwan we looked at the forecast and were told there was 100% chance of rain with some severe thunderstorms. We spent a long time debating what we should do. Eventually we decided to head out to see some hot springs that were located near the end of a subway line. We didn’t want to go anywhere too far out in case of storms and we didn’t want to do something like the zoo or the mountain gondalas which would be ruined by a thunderstorm.

As it turned out, the forecast was completely wrong. It sprinkled once or twice, but there was certainly no heavy rain or severe thunderstorms. Thankfully, we enjoyed our trip to the hot springs anyway.

After checking out the hot springs we stopped for lunch at a small shop in the area where we had Taiwan’s most famous dish, beef noodle soup. It was delicious. 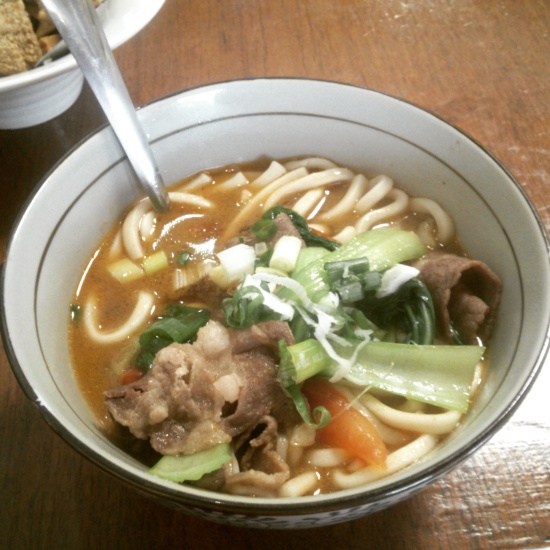 After our scrumptious lunch we headed on to another temple. This one is particularly well-known for being the place to go if you need matchmaking services. When we arrived there were lines of people waiting for their turn to receive some sort of blessing from what appeared to be some sort of lay people who were equipped to do blessings using incense. 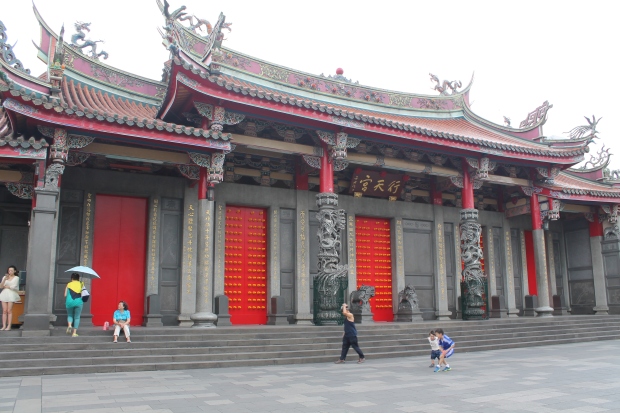 After checking out this temple (but trying not to interrupt the locals who were there) we decided to head to Taipei 101, the tallest building in Taipei and  the tallest building in the world until the Burj Khalifa was finished in 2010. It started to rain right as we arrived at the base of the building, but luckily the first few floors are a fancy shopping mall, so we popped inside and took a short break at the food court.

A lot of other people seemed to have the same idea because the food court was very crowded. We eventually found a table, but soon after we sat down an elderly Chinese couple came up and asked if we could share the table with them. (At least, I assume that’s what they asked. I only speak two words of Mandarin). Of course we said yes and then proceeded to have the most awkward snack of all time when the elderly couple pulled out a giant bag of chicken feet and started digging in. I hardcore stared at my seaweed chips to avoid looking.

Went back to our hostel a bit later to regroup before heading out to another, different night market. This night market had a really cool temple at the front of it that was all lit up for the evening and lots of fascinating foods inside of it. 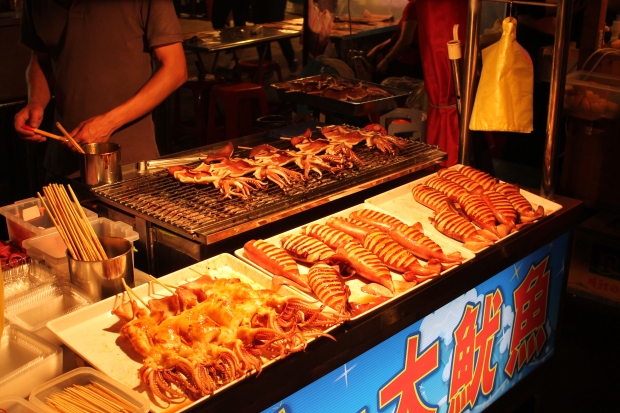 We also inadvertently stumbled upon something called the Rainbow Bridge which was kind of nice in the dark, though it’s possible that the water is all brown and murky in daylight.

Day Two in Taiwan concluded with another food success, the discovery of these Coconut Oreos at the local 7/11. If you like coconut, these are simply phenomenal. I can’t believe we don’t have these in America. Oh the things you learn by traveling!