Friday, May 1st was International Labor Day, a government holiday in many countries including Korea. In the US the holiday calendar has sort of been manipulated so that many holidays (Labor Day, Memorial Day, Martin Luther King Jr. Day, etc.) are always celebrated on Mondays. This allows people several long weekends each year to take short trips. Of course, there are exceptions for holidays whose significance is associated with a particular date, like the Fourth of July, but in general the US government holidays are designed for people to easily enjoy them.

In Korea, holidays are celebrated on specific dates regardless of when they fall. If, for example. the government holiday falls on the weekend, then it falls on the weekend and you don’t get any days off of work, even though you would have if they happened to fall M-F. This spring/summer the calendar was not treating us kindly. Three public holidays (March 1st, June 6th, and August 15th) all fall on weekends in 2015 and several others fell on random Tuesdays or Thursdays which were nice breaks, but it wasn’t possible to travel or do anything especially exciting on those days because we had to work the day before and after.

This year, May 1st was a holiday, but Tuesday, May 5th is also Children’s Day in Korea.We had a similar situation last year where May 1st was on a Thursday so we had Thursday off as well as the following Monday, but last year we had to go to work on the Friday in between so we were surprised and delighted when our schools decided to declare Monday, May 4th a “temporary holiday” so that everyone could have a 5-day spring break.

We decided to use part of our break for a quick trip to Taiwan.

Why Taiwan? you might ask. It meets a few major criteria. First, we haven’t been there before. Second, you can take a direct flight from Korea and arrive in 2 hours. Third, it is really affordable in terms of the cost of food, lodging, etc. Fourth, we’ve had friends visit and they’ve all been positive about it.

We had a fantastic time.

Since our stay was only three days (including a travel day) we tried to cram as much as possible into the short time that we had. We stayed at a fantastic hostel located down this only slightly sketchy looking alley near Taipei Main Station. The owner of the hostel was a guy named Chunky (who, for the record, was actually quite slim). Chunky spoke impeccable English and was very helpful. After we’d arrived and he’d showed us around the hostel, he pulled out a map and showed us exactly where to go and what to do. The Taipei subway system is excellent, very cheap, and very easy to use, so getting around was a breeze.

First we headed to the Longshan Temple. Longshan Temple was built in 1738 and is one of the oldest temples in Taiwan. I really enjoy the architecture of Chinese temples with all the ornate dragons and the eaves that turn up at the corners of the buildings. I find Korean temples very squat and plain in comparison.

From there we visited the Chiang Kai Shek Memorial. Part of the memorial was being renovated and was covered with scaffolding, but we were able to enter this part which reminded me of a cross between the Lincoln Memorial and the Tomb of the Unknown Soldier in Washington D.C. We were also able to witness the changing of the guard at the memorial, an elaborate ceremony that occurs once every hour. All I can say is, if anyone actually wanted to attack the Chiang Kai Shek Memorial, the changing of the guard would be the perfect time to do it since it took about 15 minutes for the guards to actually change places. 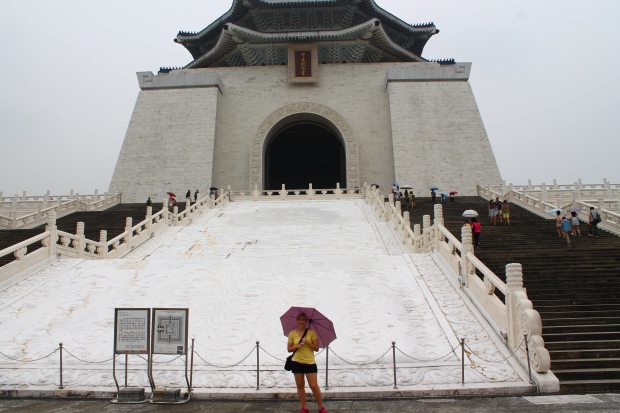 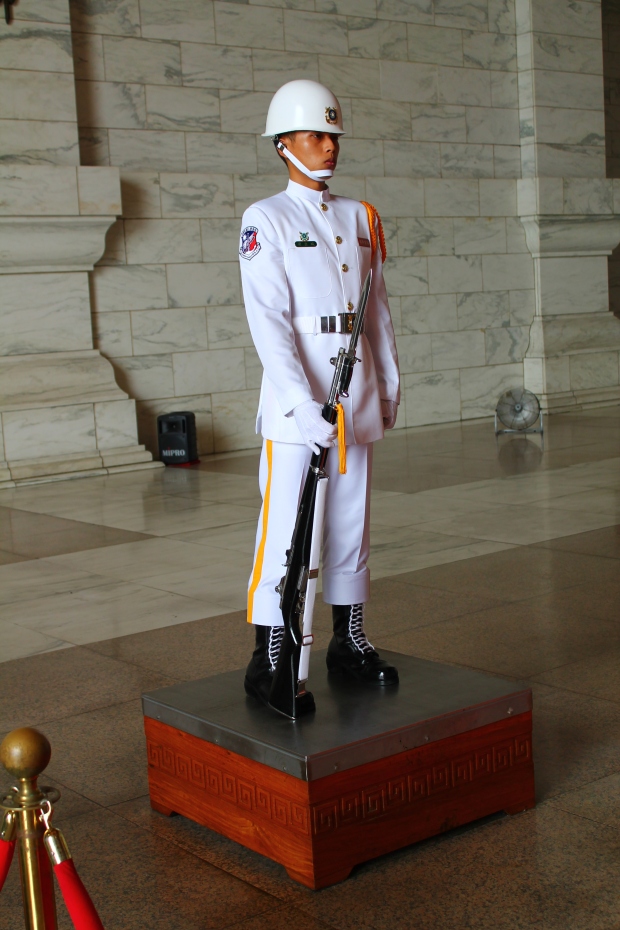 From the memorial we stopped for lunch at the famous Din Tai Fung restaurant where we had their world famous dumplings. These dumplings have a very thin skin and are filled with broth, meat and veggies. You have to use your spoon when eating them to catch all the yummy juices dripping out. They were amaze-balls. And even though this is a Michelin starred restaurant, our whole meal cost about $18 USD. 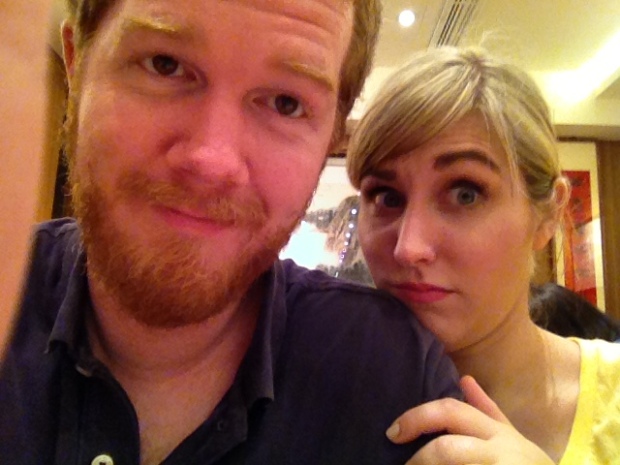 I didn’t know we were ready to take the picture…

Taiwan is famous for their food, so I tried to get as much of it in as possible in our few days there. I drank approximately 52 bubble teas and they were the best. (OK, I think I had 3 actually). Again, so cheap. Each one cost about $1.25 USD. You can find bubble tea in Korea, but you pay around $6 USD a pop for them.

After eating we headed out to hike the Elephant Trail, which gave us a terrific view of the city. Unfortunately, it was raining off and on through our whole hike, so our view wasn’t as clear as it could have been, but we still enjoyed getting a little past the city and being able to look down on it. 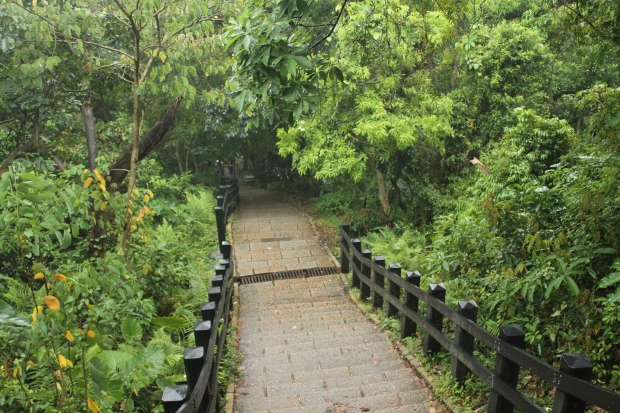 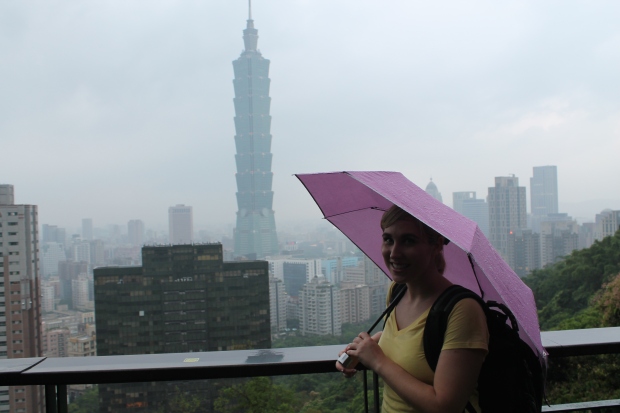 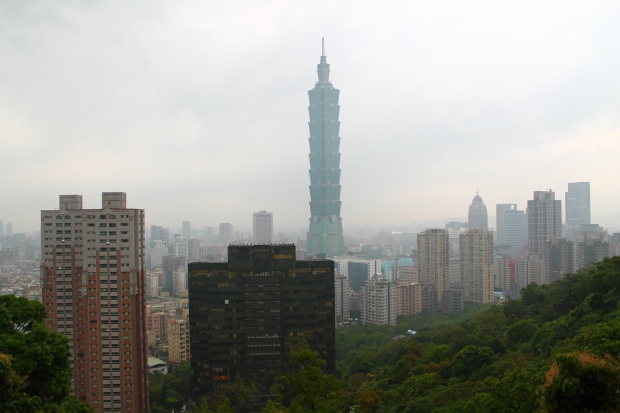 That evening we went to the Shilin Night Market. There are many Night Markets in Taipei, but unlike in other countries we’ve visited, these markets are not really aimed at tourists. Instead, they are a place for locals to shop, hang out, and eat lots and lots of street food. The Shilin market is known for having lots of cheap shoe stores. I obviously had to buy a pair. These cuties were only about $11 and there were plenty of shoes for even cheaper than that. 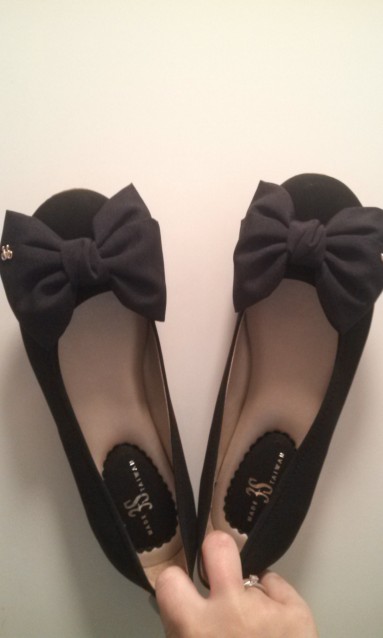 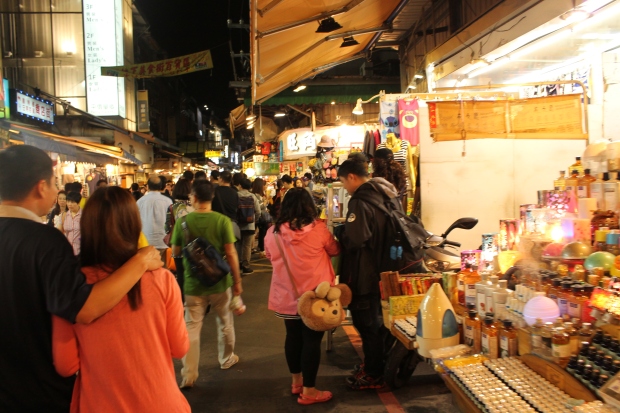 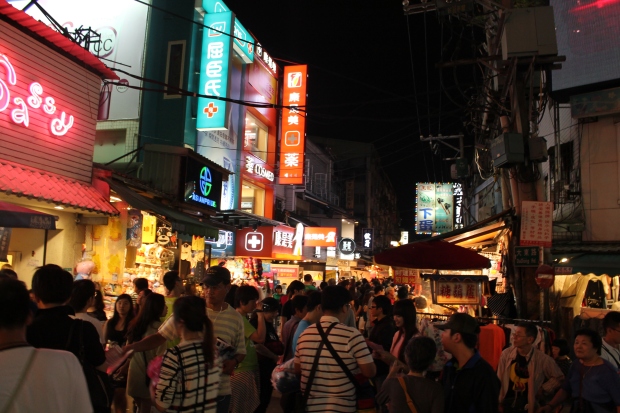 After all of that excitement we were exhausted and headed back to our hostel for the night. Even after such a short time we were impressed with how polite the people were, waiting in organized lines for the subway, giving up their seats for the elderly or people with children, and generally being very considerate of others around them. This was such a novelty to us as it is standard in Korea for everyone to push their way onto the subway before the people exiting can even get off and saying “excuse me” or “I’m sorry” for bumping someone is unheard of.  I also appreciated being somewhere new and interesting, but without having people stare at me all the time. Even though there weren’t tons of foreigners in Taipei, it seems to be enough of an international city that the two of us weren’t worth making a fuss over.

I have more Taipei adventures to share next week, so stay tuned to read about the rest of our trip!