July is over which means I can now say, “We are moving back to America this month.” Here’s a look at what I’ve been into this month. (Linking up with Leigh Kramer, as usual!)

I started this month with Bill Bryson’s book, The Mother Tongue: English and How It Got That Way. I generally like Bill Bryson who writes a lot of travel books, but also lots of other informative nonfiction. He has a laid-back style and is often very funny. I was interested in this book as an ESL teacher and there were parts of it that I found fascinating, but overall I have to admit that it was a bit dry.

I read Hero of Ages (Brandon Sanderson) this month which was the last book of the first Mistborn trilogy. (There are three
planned trilogies) Highly, highly recommend for fantasy lovers and Brandon Sanderson fans who haven’t read them before. I spent most of the month on this book since it’s a whopping 800 pages, but I was engaged the whole time and felt sad when it ended.

After finishing this epic fantasy trilogy I decided to move on to a quicker read. I read Ian Morgan Cron’s sort-of memoir Jesus, My Father, the CIA, and Me. Cron is a great storyteller and his recounting of his experience growing up with a father who was an alcoholic and secretly in the CIA was equal parts fascinating and heart-wrenching. If you like memoirs in general, you’ll probably like this. I wish there had been a little more story between college and where he is now (he’s an episcopal priest), but I think he may have written about that portion of his life more in other places.

Paris Letters by Janice Macleod. I enjoyed reading this book even though I didn’t feel like I could relate to the author that much (different life philosophies and priorities). What I most appreciated about this book is how practical it was in some areas. Janice tells the story of how she realized she’d reached a point of burnout at her job as a successful middle-management copywriter in LA. She crunched the numbers and figured out what she needed  to do to buy herself a year of freedom, and she made it happen. She headed to Europe, but ended up falling in love and staying in Paris, figuring out creative ways to support herself financially along the way.

I’m currently reading Daughter of Smoke and Bone which is the first book in a YA fantasy trilogy by Laini Taylor. It was recommended by some bloggers who normally have similar tastes to mine. I’m halfway through at this point, but I’m not sure that I’m sold. I’ll try to reserve judgment til I’m finished.

In theaters this month we saw Inside Out which was really cute and sweet and I thought had some great messages about the human psyche and what it means to be whole and well-balanced and how much we need all of our emotions, even the ones we don’t like feeling.

At home I finally watched the last season of Downton Abbey which I love, though I feel like there are some characters they just refuse to leave alone so they can be happy. Sigh. I have stayed current on the new season of Pretty Little Liars which is of course, more creepy and ridiculous than ever, but I still really want to know where it all ends up. Jonathan and I have been watching Frasier all summer. We’re on season 5 now and still enjoying it. And I somehow got myself sucked into a re-watch of Gossip Girl which is the ultimate guilty pleasure show for me. I mean, I watch for the clothes. And for Chuck and Blair…

Caprese salad. Every day. Tomatoes are huge and juicy right now and I was able to get a big beautiful chunk of soft mozzarella from Costco along with a giant container of fresh basil leaves. Drizzle with a little balsamic. So simple. So delightful.

Also lots of mandu (Korean dumplings) because I love them and it won’t be the same even if I can get it in America.

I also made a batch of one of my favorite cookies this month – oatmeal butterscotch coconut. I didn’t grow up eating this cookie but discovered it as an adult and was immediately like, “Where have you been all my life?!” It may sound like a strange combination, but believe me, it is awesome.

For more of what I’m cooking/eating, check out my Pinterest.

An article at Off the Page from my friend Briana on All That We Don’t Know.

A piece by Meredith Bazzoli over at The Mudroom on not being a traditional church lady.

This piece from Addie Zierman reflecting on Elisabeth Eliot’s death. As someone who also grew up with Passion and Purity and attended the Eliot’s alma mater, Wheaton College, I really related to Addie’s complicated feelings about a woman whose words have been a part of me for so long, for better or worse.

And this piece from Kelsey Munger, “Telling Myself I’m Beautiful,” which is something most of us could probably stand to read.

For my weekly book chats I kicked off the month with an interview with poet, Karissa Knox Sorrell, and an opportunity to win a prize when you pre-order her new poetry chapbook. I wrote about books my teacher’s made me read, gave recommendations for books to match your mood, and listed books I’ve never read but everyone else has.

Apart from all of the series I also wrote about being God’s favorite child. My favorite piece this month was my most recent one about why I think it’s OK to be unhappy sometimes.

Packing in as much fun Korea stuff as possible. This month we finished up regular semester classes at school and said good-bye to the students. I will still see some of mine the first week of August at an English camp I’m running, but my regular classes are finished. We both received some adorable (and strange) cards and pictures from our students. While I was really ready to be done with teaching, there’s no denying that these kids are cute.

Check out these awesome pictures Jonathan’s 3rd grade students made of him. For the record, this is Jonathan. I fear many of his students are blind. 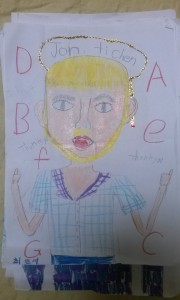 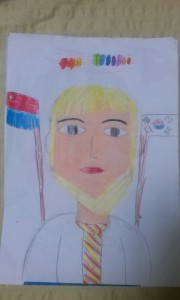 We did some hiking, took a trip to Seoul,  went to the cat cafe, checked out the Daegu Chicken and Beer Festival, and went to one last baseball game. This weekend we are going to visit a friend who lives in a small village a few hours away. We haven’t spent a ton of time in the countryside here so we’re excited for one more new experience.

July has also been a difficult month in some ways. I was deeply saddened to hear about the theater shooting which took place in my hometown of Lafayette a few weeks ago. It’s bizarre to see your small town on international news, especially when it’s for something so horrible. And last week my best friend’s father passed away after a relatively short battle with cancer and I have been grieving with her and for her as she deals with this loss which has come just two months before her wedding. It’s been hard to be so far away during this time.

August holds a lot of excitement and transition for us and we’ve been looking forward to it for so long that it’s hard to believe it’s actually here. In exactly two weeks we will leave Korea, and fly to my parents home in Louisiana. From there we will immediately pack up a moving van and drive up to South Carolina to move into our lovely condo and have Jonathan jump right into classes. We only have 5 days between our arrival in the US and the start of classes, so August may be a quiet month for me on the blog, though I will miss all of your encouragement and support as I go through what I assume will be a time loaded with all the feels.

What have you been up to in July?