I mentioned last week that I had another big adventure to share from our time in Seoul, but I wanted to make it it’s own post instead of lumping it in with the last one.

Last weekend in Seoul, I did something illegal. I got my first tattoo.

This was taken a few hours after I got it.

Tattoos are technically illegal in Korea. Only licensed doctors are permitted to administer tattoos to “patients.” And I seriously doubt this guy was a licensed doctor. So my tattoo is definitely illegal.

I think this might be the first time I’ve broken the law knowingly. Thankfully, it’s the kind of thing that law enforcement seems to turn a blind eye towards most of the time. I’ve seen numerous tattoo shops in with visible signs in Daegu and the place I went in Seoul had a big sign outside and has a nice website.  Every once in a while the police will decide to enforce this law (like they did at the international Inkbomb Tattoo Convention in Seoul last summer), but for the most part it’s a crime the way jaywalking is in the US.

Korean culture is still very conservative in many ways and for a long time tattoos were associated with gang membership. Nowadays this is changing a little bit, but it’s still fairly uncommon to see a Korean person with a tattoo and the law still stands.

So basically, my tattoo makes me feel like a bad-butt* on many levels.

I like (tasteful) tattoos. I’ve always liked them, even when I was in my self-righteous judgey phase, it was just a secret then. I’ve never gotten one before because I’d never thought of a design I was confident about having on my body forever. I felt that a tattoo should be meaningful, not just something I thought looked cool. (Not that there’s anything wrong with having a tattoo for the sake of the art, I just wanted mine to have a specific meaning).

There have been several times over the past few years that I’ve looked at pictures of other people’s tattoos and thought about what it would be like to get one and invariably I would dream that night that I’d gotten one and was freaking out because I regretted  it. This subconscious reaction made me think I might never actually feel comfortable about getting one. At the very least, I knew if I ever did it wouldn’t be a spur-of-the-moment decision – it would have to be something I had no doubts about.

A few months ago I started working on a book. It’s a spiritual memoir that is centered on the work of grace in my life. As I started writing and dwelling on grace , I realized that grace is the thing that has marked me most profoundly. And it was suddenly clear to me that I wanted grace to mark my body the way it has marked my life.

For a few weeks after I first had the idea I used a marker to write the word on my wrist to see how I felt about seeing it there before I did something permanent. From the first moment that I did it, it felt natural. It reminded me constantly of God’s work in my life. I looked at it and I thought, “Of course. This belongs here.”

I didn’t have any plans to do it quickly, but I asked a friend who had gotten a tattoo in Korea where she’d had hers done and she told me the name of the shop in Seoul. We were already scheduled to go to Seoul a few days later. I asked Jonathan what he thought and he said, “If you’re ready, go for it.” So I did.

From the moment I walked into the shop I felt completely at peace. I haven’t had a moment of doubt or wondered at all if it was the right decision.

Before this I didn’t really know very much about the process of getting a tattoo, so I thought I’d share that as well in case you’re curious.

When we arrived a very old man greeted us. I think he is the shop owner, but at first I was like, “Um….is this old guy really the tattoo artist?” (He wasn’t).

My dear friend Asharae Kroll is a super-talented photographer, food blogger, and hand-letter artist and she custom-designed the lettering for me. Not only is it super beautiful, but it’s also even more meaningful to me to have a one-of-a-kind tattoo designed by my friend.

There was a young girl who did all the prep work for the tattoo. I’d sent a file with the lettering Asharae created and she printed it out in different sizes and had me choose one. After this, the girl traced the lettering on the back side of the paper in some sort of ink that would transfer onto my skin. Then she cleaned my arm with tons of disinfectant and drew a box in the exact place I wanted the tattoo. She rubbed some kind of petroleum jelly-like gel onto my arm and then pressed the stencil she’d made in place. The first time I wasn’t completely happy with the positioning, so we started over and did it again. 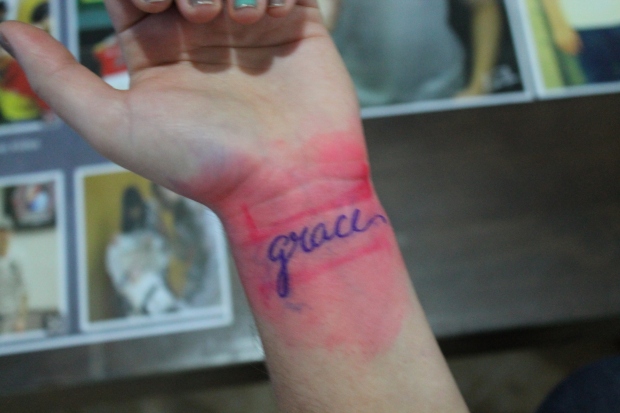 After that I had to wait 10 or 15 minutes for the stencil to completely dry and that’s when the actual tattoo artist showed up – a man who was maybe in his early 30’s. I laid on a table with my arm out to the side and he showed me the brand new needle he was using and then went to town. 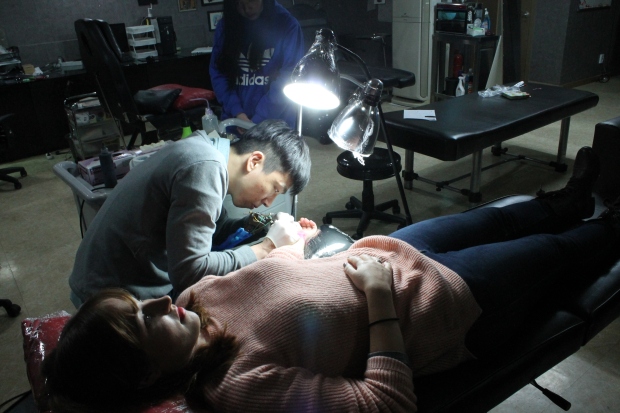 Did it hurt? Honestly, it hurt as much as I expected it to. It didn’t feel good, but it wasn’t extremely painful. It’s a sharp stinging feeling, most similar to the way laser hair removal or some other laser procedure feels. The good thing is that he was only tattooing each little section for 10-15 seconds at a time. So just when it would get to the point where it was getting hard to sit still, he would stop and wipe off that spot and move over a bit. Since it’s pretty small, the entire thing took about 20 minutes to ink. It hurt while he was doing it and stung for about an hour afterwards. It has not hurt at all since then although for the first few days it was tender if my clothes rubbed it or I bumped it. It never really turned red and it didn’t hurt at all if I wasn’t touching it. I had to keep it clean and put lotion on it several times a day, but otherwise it was hardy noticeable.

Now, a week later, it’s mostly healed and is smooth to the touch instead of raised like it was initially. It feels like it’s always been there – like it was meant to be part of me.

This is what it looks like today. It’s still peeling a little bit but mostly healed. Also, thanks to this picture I am now self-conscious about how hairy my forearms are.