Last Thursday was the Lunar New Year in Asia (also called the Chinese New Year). Well, technically, it was the Lunar New Year everywhere, but it’s mostly celebrated in Asia. We had three days off from work, which only happens twice a year – in the fall for Chuseok (which is like Korean Thanksgiving) and in the winter for Seollal (the Korean name for the Lunar New Year). We wanted to take advantage of the days off and take a short trip, but even several months ago plane tickets to anywhere during the holiday were prohibitively expensive. We settled for spending a few days in Seoul just to get away from home and relax a bit.

You’d think the Lunar New Year would mean lots of special cultural events in Seoul, but in fact, Korean holidays are kind of lame (in my humble opinion). Everyone travels to their family homes where they make and eat an elaborate traditional meal with special foods like ddeokguk, a soup with disk-shaped rice dumplings in it.They also perform bunch of ceremonies to honor their ancestors and many people will dress in hanbok, traditional Korean clothing. When I asked my Korean coworkers about the holiday they always just complain that it’s so much work. 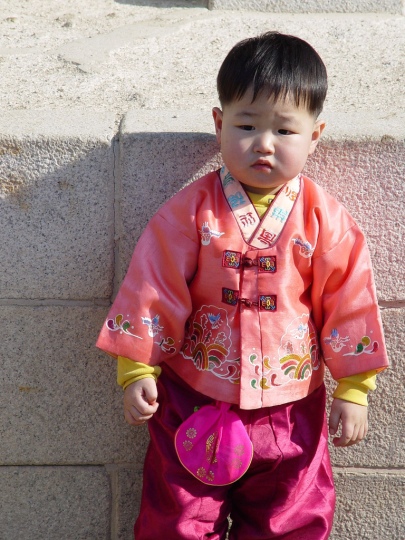 [Koreans also count the time a child is in the womb as the first year of life, so when a baby is born it is already 1 year old. So, although I am 27 years old, when I give my age to a Korean I say I am 29 – one extra year for the year I was in utero and one extra year because I was born in 1987 and everyone born in 1987 just turned 29 regardless of when in the year their birthday falls. Since I was born in December this means that if I had lived in Korea when I was born, I would have turned 2 years old when I was only 1 month old by the rest of the world’s standards.]

Because more than half of Seoul’s population is not from Seoul, the city empties out for the holiday, so it was much quieter than usual there. We looked  to see if there were any special events we could attend, but many cultural attractions are actually closed for the holiday and the ones that were open (the palaces and folk village) were places we’ve already been. We’ve learned that the biggest Korean holidays are family affairs that are celebrated privately, so unless you have an invitation to join a family for their celebration, there isn’t that much to participate in.

The air pollution in Seoul during our trip was off-the-charts high (300 + is considered “hazardous” and it was in the 900s) so being out and about wasn’t particularly pleasant since it was too hazy to see anything or to take any decent pictures, but we were happy to have a low-key time just enjoying being away from home and not having to cook or clean or do other normal life activities for a few days.

We dubbed our trip to Seoul “Treat Yo Self 2015” which is a reference to Parks and Recreation, one of our favorite shows. (If you don’t watch Parks and Rec, stop reading this now and go catch up). In the show two of the characters are really into fancy, luxury items and experiences and once a year they do a “Treat Yo Self” day where they indulge all their extravagant wishes. We decided to do the same. I live tweeted/Instagrammed the experience for those who follow me there.

We didn’t have any truly extravagant wishes, but we did have a few treats in mind:

1. Stay at a hotel with a bathtub (we normally go the hostel route to save money and even if you get a private room those generally have shared showers). Take all the bubble baths.

2. Go to Taco Bell. I know you’re judging me right now, but I also know you are secretly jealous. It’s amazing the things that seem like a treat when you’ve gone without them for 19 months.

3. Get pies from Tartine. This is a little pie/tart shop in Itaewon, sort of the expat center of Seoul. It is the only place in Korea I have found pie that is proper pie. And they have a ton of flavors. Mmmmmm.

We had butterscotch and lemon meringue.

4. Visit the English bookstore. Since both of us are huge readers, visiting an all-English bookstore is heavenly. What the Book (also in Itaewon) has a big selection of both used and new books. It’s a little pricey since everything has to be imported, but they do offer free shipping within Korea if you order online.

Jonathan got Margaret Atwood’s book Oryx and Crake. I’m on a no-buy because I have 17 unread books on my kindle right now. (Oops).

5. Butterbeer and Chili fries. We found a delightful English pub with the most enchanting menu of all-time. Harry Potter inspired Butter beer (similar to what you can get at HP world except this one was alcoholic), a range of different hot dogs, and fries covered in chili and beef and bacon and cheese and mayo and grilled kimchi on the side (because this is still Korea). Yes, that was heart attack waiting to happen, but you know what…Treat yo self.

6. Shopping. I went into this trip prepared to do some shopping, but it ended up being one of those weird times when I was planning to buy all the things, but couldn’t find anything I wanted. I felt a little cheated – after all, I held up my end of the bargain, going to stores with money – and the stores let me down. (I know, I know, first world problems).

The Myeongdong central shopping area in Seoul. So many stores and I couldn’t find a thing to buy.

In spite of our lack of unique cultural experiences, we are calling “Treat Yo Self 2015” a success and I hope it’s a tradition we keep up every now and again.

All joking aside, self care is really important and while that doesn’t have to mean doing anything expensive or extravagant, it’s important to tend to our souls by building in time to rest, relax, and do the things that rejuvenate us, whether it’s bubble baths or window shopping or going to a baseball game. You can’t pour out to others if you are completely empty yourself.

I had one more really big adventure in Seoul, but you’ll have to check back next week to hear about it!