Our second day in Tokyo was packed with great activities. After our morning coffee boost we headed to the observatory of the Tokyo Metropolitan Government Building. This is a free observatory, which is really cool. It’s only 45 floors up, but still high enough to get a pretty good view. It was a little too hazy to see Mt. Fuji in the distance, but we were assured that it was there. 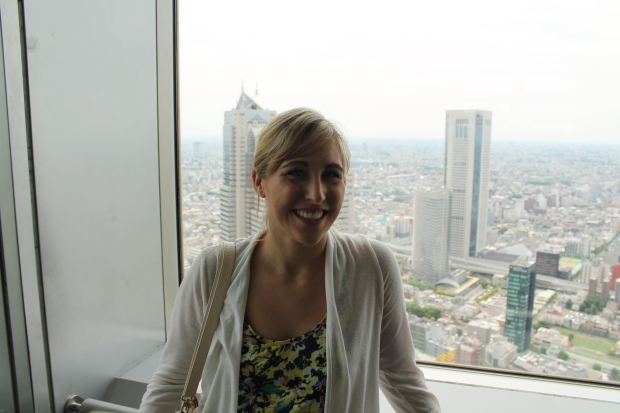 From the observatory we went to Yoyogi Park. We could see the park from the observatory and it looked like a big wooded area, but it was hard to tell what it would be like on the ground. When we got there we found a wide dirt road between giant stands of trees. It was very peaceful and quiet even though there were lots of people there. 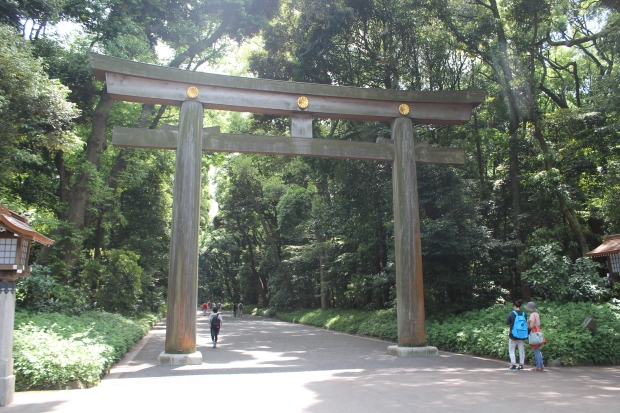 Inside of the park is the Meiji Shrine which supposedly houses the souls of Emperor Meiji and his consort Empress Shoken.

We weren’t really supposed to take pictures of the shrine since it is sacred, but this is sort of the side of the shrine. Plus, hubster became obsessed with this tree which he felt was the “most symmetrical tree in the world.”

On our way out of the park we found these displays with barrels of wine and casks of sake. Apparently these are donated every year from the wine and sake brewers to thank the emperor and empress for blessing their production. 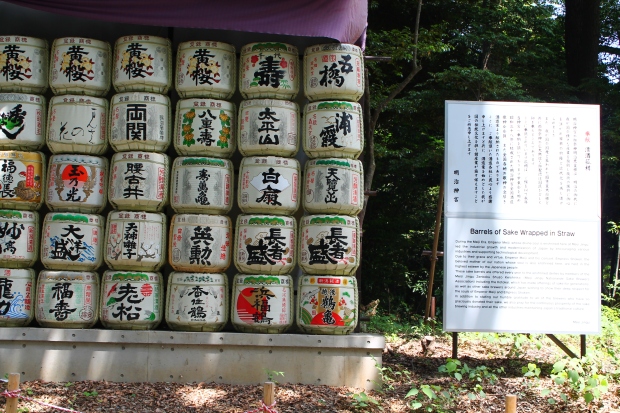 Barrels of sake donated to the shrine.

When we left the park we found ourselves in the Harajuku district, an area know as a popular youth hangout. This is an especially good area to see the young people who like to wear anime-esque costumes and there are many shops that sells those kinds of clothes.  I don’t know a lot about this particular subculture, but in Japan it is fairly common to see people (especially girls) dressed in these costume-like clothes trying to emulate favorite characters. We saw some girls in pretty amazing outfits, but weren’t really comfortable chasing them down with a camera since they are just regular people going about their regular lives.

I made a pretty important purchase in Harajuku. Hubster did not understand why I had to have this shirt and was reluctant to let my buy it, but I finally convinced him that I needed it in my life and promised to wear it every day. In fact, I put it on immediately. 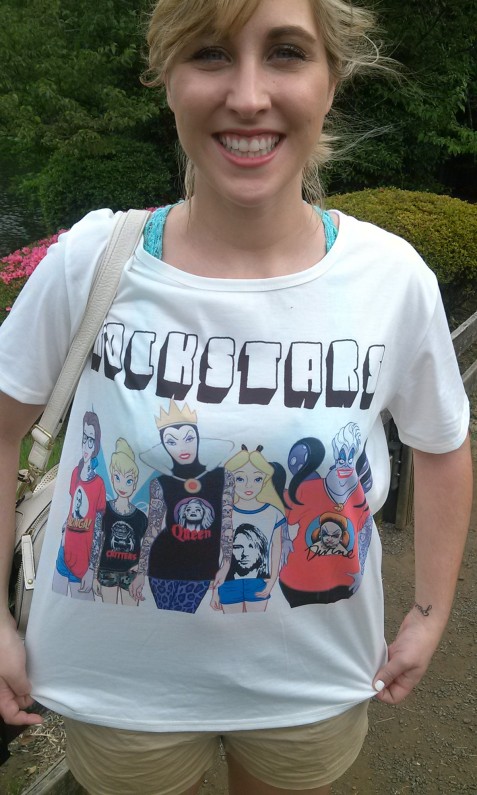 Belle has a sleeve of tattoos and glasses and is wearing a Bazinga shirt. What’s not to like?

In this area there were tons of crepe and soft-serve ice cream shops, but we were intrigued by a store that sold homemade chips and soft-serve. Like together. You could get them with chocolate drizzled on top or you could get the chips in a variety of flavors. I went with regular potato chips and plain vanilla soft-serve. Since I’m a huge fan of salty sweet combinations (I would sell my firstborn for anything salted caramel), I really liked this. Kind of like dipping your french fry in your frosty.

After shopping and snacks we decided to visit the Shinjuku Gyeon National Garden. By this point in the day we had already done a ton of walking. We walked around the garden for a while and then found a bench to sit on and do a bit of reading. I liked that these gardens were so beautiful and well-maintained, but they were intended for people to really use, so there were people with blankets all over the place relaxing and enjoying the day.

After relaxing for a while we decided to head back to the area around our hostel and look for dinner. I really wanted some sushi (because, Tokyo, duh) but we needed to find an ATM first. For some reason, we had the hardest time finding an ATM in Tokyo that would take my card. I’ve never had this problem before, but we tried 7 or 8 ATMs and none of them would work with either my Korean or American cards. I have no idea why, but the only ATM we could get to work was CitiBank. Just an FYI for anyone traveling there.

We went to a tiny conveyor-belt sushi restaurant where you paid per plate (plates were different prices depending on what fish they used). I love sushi so eating it in Japan was high on my list, but I have to admit that I still enjoy the westernized versions with all the fancy ingredients a little more than the real thing, which is usually just a piece of fish lying on top of a little rice mount, possibly with some wasabi. 😉 Jonathan is not a big fish eater, so he mostly watched and afterwards we went to a kebab place where he got a kebab. (Side note: there are Turkish people running kebab stores absolutely everywhere in the world. Random, but I’m not complaining as I love that stuff). 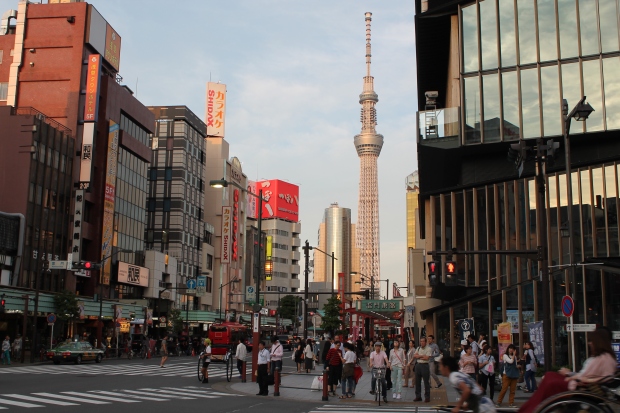 We took a few pictures in the area around our hostel while we were trying to find a bank/go to dinner.

Of course, we needed to finish trying out the local snack varieties, so we picked up a few of those from the 7-11 and continued our assessment. 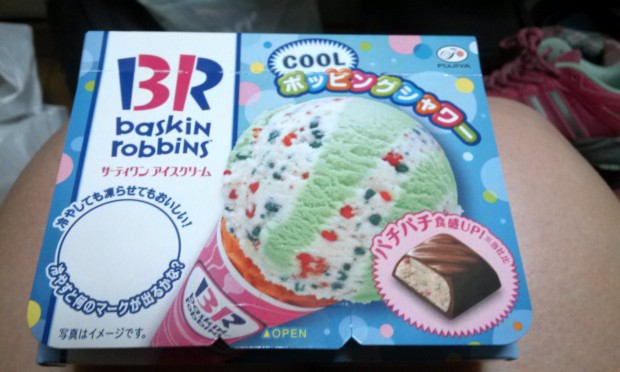 In case you are wondering, these are little chocolates filled with a vanilla flavored nougat and also pop rocks. Yes, pop rocks. As in they fizz and crackle in your mouth. It was quite the surprise.

These were intense. A little too intense for me. But if you really, really love wasabi they’d be great.

Our hostel had the smallest room I’ve ever seen – we could hardly both stand in it at the same time – but of course, that didn’t matter much since we spent most of our time out and about. But one good thing about our little room is that there was a huge window that looked out right on the river so we could see sights like this at night.

I have no idea what that weird sculpture thing is…we called it the rutabaga the whole time we were there.

All in all it was a fantastic adventure and we’re so glad we took the opportunity to take in Tokyo before leaving Asia. Who knows, maybe we will end up back here someday!

If you have an adventure to share, add your link to the link-up by clicking the button below. You can participate in all of the adventures or you can just do a few – no pressure. If you missed last week’s adventure (also about Tokyo) you can find it here. And if you are new to my Fifty-Two Weeks of Adventure project you can find out more about it here.