I like to think I have pretty good taste in books and that most of what I read is high quality (and let’s be honest, I want YOU to think I have really sophisticated taste in books), but I think we all have moments when we just need something light and breezy that doesn’t require too much of the reader. So basically, chick lit. I consider these my guilty-pleasure books. These are books that I know aren’t great literature – they are often predictable and formulaic, maybe even a bit silly, and they certainly don’t stay with me in any significant way –but every so often I just need a book like this to relax, unwind, and escape for a little while. I especially like to read these kinds of books after finishing a particularly long book or if I’ve been reading a lot of didactic non-fiction.

Even when I’m in the mood for something light and easy, the books I read still have to meet a certain internal standard. Sometimes a book is just too poorly written or the plot is too ridiculous for it to be enjoyable to me. I have abandoned quite a few beach reads because I found the prose to be distractingly bad or the main character unrelateable. That internal standard is different for everyone and it’s hard to pinpoint exactly where that line is, so instead of trying to explain my criteria, I’m just going to share some books (or writers) that have made the cut for me.

This list doesn’t include YA books (which I’ll do a separate post about) or humorous non-fiction (also a separate post). It also doesn’t include books in that difficult to pin-down genre that’s somewhere between chick lit and literary fiction (authors like Jennifer Weiner and Liane Moriarty whose books are much more complex and nuanced but still have an entertainment aspect to them that is typically lacking in more high-brow literary fiction).

As always, there is a list of Kindle books that are currently on sale at the bottom of this post.

Sophie Kinsella’s Shopaholic series. I’ve read a few of Kinsella’s other books as well (some written under the pen name Madeleine Wickham), but none enchanted me as much as her Shopaholic series. In spite of her frankly ridiculous escapades and the fact that everything works out perfectly in spite of her irresponsible choices, I couldn’t help being charmed by Becky Bloomwood. I loved that the series continued through her life. I haven’t read the latest installment, Shopaholic to the Stars, but all the previous ones have been lots of fun. 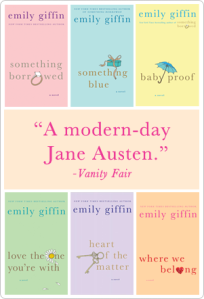 Emily Giffin’s books. Giffin’s books are a bit more nuanced than your typical rom-com (more-so than Kinsella’s at least), but are very fast and enjoyable reads. I will say that her first book, Something Borrowed (which was made into a movie a few years back), was problematic for me since it sort of justifies a situation where one character steals the other’s fiancé. The friendship dynamic was the most interesting part of that book, but it did irritate me the way the main character wanted to be with this guy regardless of the fact that he was unable to stand up and make a commitment. I enjoyed her subsequent books, Something Blue, Baby Proof, Heart of the Matter, Where We Belong,  and Love the One You’re With, much more. My favorite was Heart of the Matter which deals with two women with little in common whose lives collide due to a tragic accident and is probably the least standard chick-lit of the bunch. I don’t recommend Giffin’s most recent book, The One & Only. I was really excited when it came out last year since I had enjoyed her previous books, but I couldn’t even finish this one. The prose was bad, the subject matter was kind of creepy, and the main character was obsessed with football, which didn’t easily endear her to me. If you stick with her other books though you should find some entertaining, quick reads.

The Rosie Project by Graeme Simsion. This was a completely delightful rom com. Socially awkward genetics professor, Don Tillman, embarks on a quest to find the empirically perfect wife for himself based on scientific facts. What he isn’t counting on is falling in love with a woman who doesn’t meet any of his criteria. There is a sequel to this out now, but I haven’t read it yet.

Where’d You Go, Bernadette by Maria Semple. This was such a fun, quirky, unpredictable book. Unlike most of my guilty pleasure books, this one isn’t really a romance. Instead it tells the story of 15-year-old Bee whose mother, Bernadette, is a once-renowned architect who has become a recluse. Bernadette is eccentric and unpredictable, but she is also Bee’s best friend. Bee is preparing to leave for boarding school, but first she and her family will take a long-anticipated trip to Antarctica. That is, until Bernadette disappears. Bee pieces together all the information she can find to figure out what happened to her mother.

Last Night at Chateau Marmont by Lauren Weisberger. Weisberger is best-known for writing The Devil Wears Prada, but this is my favorite book of hers. This book explores the dynamics of a marriage when one partner skyrockets to fame and fortune. People seemed to either love or hated this one. I enjoyed it.

The Nanny Diaries by Emma McLaughlin and Nicola Kraus. Maybe it’s just because I’ve been nanny and so could identify with a lot of the the situations in this book, but I really connected with this and enjoyed reading it. Follow Nanny as she stumbles into the world of Manhattan’s elite with an irrational boss and a 4 year old boy in tow.

Attachments by Rainbow Rowell. I read this book a few months ago and couldn’t help being charmed. A modern twist on the epistolary novel, this book is comprised of a series of emails between two best friends who work in the same office. When Lincoln is hired to keep tabs on employee use of the internet at work, he finds himself falling in love with a woman he only knows from reading her emails.

What are your favorite guilty-pleasure books? Leave a comment below!

*As of March 27th. I use the US Amazon site. Prices may vary on other sites.

Cinder, Marissa Meyer ($2.99). This is a YA book, the first book of the Lunar Chronicles. It is a futuristic sort-of Cinderella story, except Cinderella is a cyborg and there’s a planet-wide pandemic. Just reading the synopsis, this is not the sort of book I would naturally gravitate toward, but it came highly recommended and I was impressed. It’s clever and imaginative and I couldn’t put it down.

Never Let Me Go, Kazuo Ishiguro ($2.99). This book is widely acclaimed. I just purchased this, but haven’t read it yet.

Happier at Home: Kiss More, Jump More, Abandon Self-Control, and My Other Experiments in Every Day Life, Gretchen Rubin ($1.99). I just purchased this one myself.

The Bible Tells Me So; Why Defending Scripture Has Made Us Unable to Read It, Peter Enns ($1.99). Again, just purchased this on good recommendations. I’m really curious about this one.

A Prayer for Owen Meany, John Irving ($1.99) A classic. Many people list this in their all-time favorites.

Outlander, Diana Gabaldon ($1.99) I mentioned this series in my Books I Love to Hate post, but a lot of people disagree with me.

The Bean Trees, Barbara Kingsolver ($4.99) One of my favorite writers. Kentucky native Taylor Greer tries to escape her roots but succeeds in collecting a 3-year-old native American girl along the way.

An Altar in the World: A Geography of Faith, Barbara Brown Taylor ($3.99)