I’ve heard a lot of people rant about AT&T for various reasons (particularly U-verse customers.) It’s not at all uncommon for me to hear a friend or coworker ranting about something incompetent AT&T has done or a simple problem they seem unable to fix or just the lack of reception anywhere you really need it (like anywhere in my apartment, for example.)  But I have a hard time even understanding how it’s possible for them to have messed up whatever they messed up to cause this.

At one in the morning on Tuesday (or I guess Wednesday) I received this long string of texts from a number I don’t know that has an area code for Joliet, IL. For a while I slept through them, but after about 8 texts, this guy started calling. Four times in a row.

Yesterday, this guy told me that he wanted to see any narcs for sale which was funny because as far as I knew a “narc” was a cop who specialized in drug busts. (Incidentally, I didn’t have any.)

And today I found out that his name is Paul and that he has cash. He also left me a nice voicemail about how he “Just wanted to see what was going on and sh*t.” 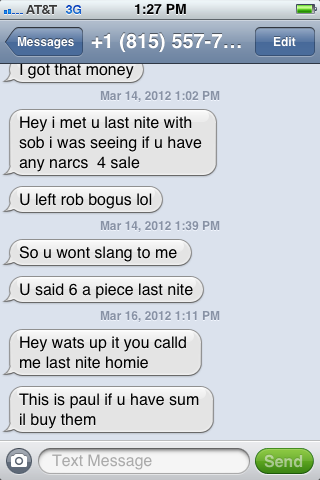 When I get off of work tonight I’m going to go to or call AT&T, explain that they’ve messed something up and also get Paul’s number blocked, I am thinking I’ll go into the AT&T store…I can’t imagine the automated phone system has an option for “If an unauthorized drug deal is being conducted through your phone, please press 5.” But for today I’ve been amusing myself thinking of possible ways I could respond to him.

“I’m not who you think I am.” Just that. And leave him wondering.

“Paul, this is God. I know everything.”

“Paul, this is the police. We know where you are. You are so busted.”

I actually did consider trying to report Old Paul to the police. But I don’t really know that they can do anything about it what with all of our laws about invasion of privacy. It would probably just end with AT&T getting sued for allowing someone else to receive personal messages and Paul getting away with it.

Mostly this whole bizarre interaction has made me really sad (and a little teensy bit freaked out that this druggie has my number. But at least he’s in Illinois, I think.) Especially when I listened to this guy’s voicemail. I can’t imagine living a life so empty that you’re this desperate to get high. That you spend three days at all hours of the day getting cash so you can make a deal. This guy lives in some incredible bondage. His life is ruled by this addiction.

Today I’ve been thinking about Paul and about how sad it is that his life is so empty. But I’ve also been thinking of how many Paul’s there are around me. Men and women and children who are throwing themselves into prestigious careers, financial success, popularity, substance abuse, education, materialism, etc. to find some sort of meaning, to make themselves feel better, or just to pass the time. And I’ve been thinking about how many ways I am like Paul. How often I let my need to be in control, to know what’s coming next, to have everything figured out rule my life.