Last weekend I went with Christina to her cousin’s birthday party at a cool restaurant in downtown Raleigh. While I was there I received a text message from a friend who got married a few months ago. The text contained a picture of a positive pregnancy test. I was really excited for her, and also amazed at how quickly they’d gotten pregnant since they’d only been married a short time. I forwarded the picture to Jonathan along with a message that said, “Well…I guess they decided not to waste any time! I just got this text from ‘Monica.’ ” (name changed to protect the innocent.) Then I stuck my phone back in my coat pocket and kept chatting with everyone. About 15 minutes later I realized I never heard back and pulled my phone out again. No messages. I left it on the table and continued with dinner. About three minutes later, my phone started buzzing in uncontrollable spasms. You know when you are in an area with no signal for a while and then you connect again and all the stuff that’s been sent the whole time you were out of signal comes through all at once? Well, that is exactly what had happened. Apparently, back in my coat pocket, things hadn’t been going through. I looked at the screen to find three texts and about 10 missed calls from Jonathan. For a minute I thought, “Geez, why is he so worked up about this…it’s not really even his friend.” Then I looked at the text exchange and found that what I thought I had sent had not all gone through. This is what he had received: 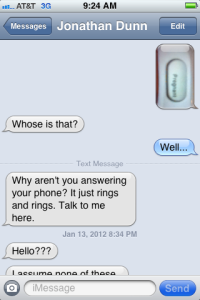 I am in soooo much trouble...

Needless to say, the man wanted to kill me. I tried to talk him down, explaining that I would never just joke with him like that. That I was so sorry. That obviously I would never tell him that I was pregnant via text message and that I would also never take a pregnancy test while out to eat with friends. That I should have thought it through and should never have sent that message in the first place. That I was the worst wife ever. His response, “Are you completely insane?!” And later, “Do not ever send me something like that again!” On Friday night, our marriage was on shaky ground. To all my girls out there, married or not, learn from my mistake. Never send your husband a text message with a picture of a positive pregnancy test on it! Or an email even, probably. Oh, technology…how you have failed me.

So the weekend started out not quite as expected what with the panic and rage, etc. but Saturday morning dawned very sunny and promising (although also quite cold and windy.) We put on all of our cool running gear in which we look awesome and very professional: running tights, shorts over tights (Christina),knee brace (me and Jonathan), long sleeved shirt, jacket, arm-band for carrying iPod, fleece headband that covers your ears, socks, running shoes, and those cool knit gloves with the special fingertips where you can still use your touch-screen phone while wearing. We were decked out. I wish I had a picture so you could behold us in all of our awesomeness. And it is a good thing too because that wind was COLD! But all three of us succeeded in running our first 11-miler with no walk breaks, just occasional stops for water. I can’t stress enough what an accomplishment this was for all three of us. We are not runners. Any of us. And yet, in just four months we have gone from running ¾ mile and then nearly puking or passing out (at least that was me back in September) to doing a 2hr, 11-mile run. I am amazed at the human body. (Although somehow, despite being in the uncontested best shape of my life, I’m still hanging onto those 10 lbs that have tipped me over the edge of my “healthy weight range” and into “overweight, but not yet obese” range. But that’s another story.)

In celebration of our amazing accomplishment we went to Outback and used a Christmas gift card to eat a large amount of Bloomin’ Onion, steak, baked potatoes and Caesar salad. Yum. (Perhaps now understanding those lingering 10 lbs…) We went home and had a relaxing, uneventful night.

Sunday morning, Jonathan wakes up in horrible pain all over his stomach and back. At first we think it is food poisoning, but after a few hours we realize it’s something more than that. Eventually I take him to Urgent Care hoping they can do something for him. The man is in so much pain it is all I can do not to burst into tears, but, knowing that wouldn’t be the least bit helpful I instead make a lot of un-funny jokes. It’s something I’ve always hated about myself-that in a medical crisis I get so upset I feel the only way to keep myself from exploding with grief (not helpful) is to crack corny jokes (equally not helpful.) Eventually the doctor tells us it is either a kidney stone or the early stages of appendicitis and we go home to wait and see. Thankfully, a few hours later it becomes clear that it is not appendicitis and after drinking what seems like several gallons of fluids, Jonathan starts to feel better. We are so thankful that Jonathan is more or less back to normal with only a few residual side effects.

I have heard from multiple sources that kidney stones are one of the most painful things the human body can experience. Most say it is the closest equivalent men can experience to childbirth and some women who have been through both even rank kidney stones as the more intense pain. I feel horrible that Jonathan had to go through that. But I know that one day, a few years from now, when that positive pregnancy test is mine, I will be reminding him of what this felt like. And I will probably point out the fact that he was only dealing with something smaller than a dried pea. While I will be dealing with something the size of a small watermelon.  But don’t worry, I probably won’t tell him any of that in a text message. 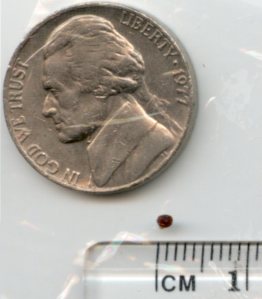 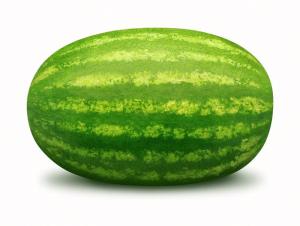