We arrived at the Athens airport around 11:30 PM on June 8th after spending the day flying to Istanbul and then sitting in the airport there for several hours. Our first step was to file another lost bag claim for Jonathan’s bag, which we already knew had never left Atlanta. We hoped we’d get it before we moved on to Italy on the 10th, but it wasn’t looking promising.

We took a 30 minute bus from the airport to the city center where our Air BNB host told us we could take a 5 minute taxi ride to our apartment. It was well after midnight by this time and we were exhausted. We got into a cab and gave the driver the address along with a map and directions the host had provided in Greek. The driver was friendly and chatty, but soon began putting on what we later realized was an elaborate show of not being able to find the place. He drove us around for about 20 minutes, getting out of the car at several points to poke his head down alleys.

Finally, we passed the street we were supposed to turn on, and our host, Lydia, saw us and ran towards the taxi waving her hands and yelling. He quickly turned the corner and let us out, asking for 15 euros. As we grabbed our bags from the trunk, Lydia, a bad-ass, no-nonsense true Athenian woman, marched up and started screaming at him in Greek. He yelled back, and we stood awkwardly holding our bags as they argued in the middle of the street. Then she turned to us and said pleasantly. “Only pay him 5 Euros. He knows the cost is 5 Euros. He pretended to be lost on purpose. It’s only two turns from the town center.” The taxi driver protested that this wasn’t fair, that he’d been driving around with us for 45 minutes (false) and that her directions were bad. They argued some more. Lydia called the police and reported him. I think we ended up paying him 10 euros and he left. It was 1 AM.

Corrupt taxi drivers aside, Lydia was a wonderful host and made sure we had everything we needed including directions to the major sights, which were within walking distance of us. Since we would only have 1 1/2 days to explore Athens, we wanted to pack in as much as possible.

The next morning we set off to see the Temple of Zeus, Hadrian’s Gate, the Acropolis, the Parthenon, and the Agora. I really enjoyed the way these ancient ruins were tucked into the modern city, and how the Acropolis still rises above everything else as it did in ancient times. We were both in awe of the size and the age of these ruins. It’s genuinely hard to comprehend just how long they have stood and how many generations of people have visited these places. Although the Agora is mostly rubble at this point, it was still amazing to walk to through it and think about Plato, Socrates, and Aristotle, spending their time on the very same ground. 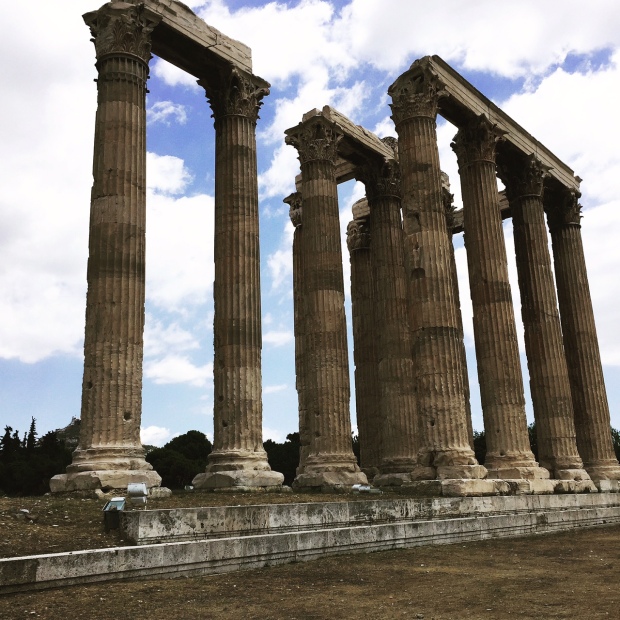 Temple of Hephaestus in the Agora 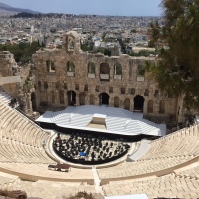 View of the Acropolis from the Agora 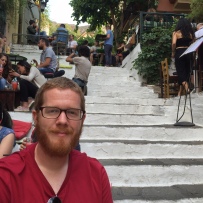 Cafe on the Steps

Changing of the Guards

We had lunch in a restaurant in the touristy area near the base of the Acropolis and later stopped for a drink and a slice of lemon pie at a charming café built into the side of a staircase. There were restaurants and cafes on both sides of the stairs  with little bench-like tables for people to sit on the steps with their food and drinks. The neighborhood around these famous sights were adorable and everything you picture when conjuring up images of Greece.

We were surprised to find that the Greek people we met in Athens were the warmest and friendliest people we met on our trip. My only regret about Athens is that we did not have time to eat more Greek food. My father is of Greek heritage and I grew up eating Greek food, which I love, but we were only in Greece for one dinner time.

After our full day in Athens, I developed an impressive migraine (likely triggered by air travel, dehydration,stress, and general tiredness) and had to put myself to bed early to sleep it off. In the morning, we had coffee in a cute café and then took a walk through the National Gardens. When we returned from our walk, Jonathan’s bag had miraculously arrived from the airport, just in time for us to get on the Metro and head back to the airport for our afternoon flight to Rome.

Other than the big sights in Athens (which were amazing), I wasn’t particularly enchanted with the city itself, but  I now have my heart set on a trip back to Greece to visit the islands. (This is the problem with me, every time I check a place off my list, three more pop up). Although we had an incredibly short visit, we enjoyed our time in Athens, scheming taxi drivers aside. It was a great first stop after a rocky start to our trip.